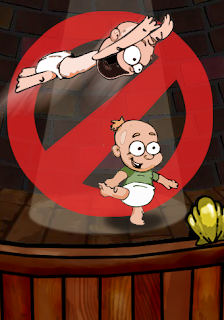 Posted by GrappleGunGames at 3:50 pm No comments: 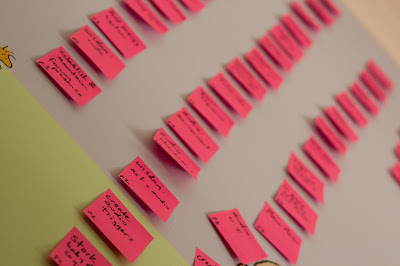 The campaign is done, and the news is sweet! 89 of the world's finest people gave us money to help us make Tasty Tasty Grandpa a reality, and for them we say a massive THANK YOU! We exceeded our $5000 goal, ultimately basking in the warm and mighty generous glow of $6511. Yeeehaaaar! 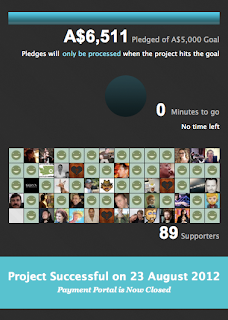 So what happens now? A few things simultaneously, actually. We start getting all the rewards out to our backers. We start looking for the perfect programmer who we can now pay (YES!) to help us finish our game. And we fire up the great Grandpa production machine to full heat and slam through our tasks to get this game into YOUR EAGER LIL' HANDS! It'll be a few months away yet, but thanks to you all, it won't be infinite months away. YOUZ IS AWESOME!

And special thanks to Pozible for their support and their magical portal and to Freeplay Independent Games Festival for helping promote us. And to EVERYONE who retweeted, reFacebooked, re-emailed, and spread the word far and wide!

Posted by GrappleGunGames at 3:45 pm No comments:

Yesterday, 7 days remaining on the campaign clock, the magic happened. BOOM -- we hit the crucial target for our project's funding! Which means... we get the funding! WE GET THE FUNDING! You people are awesome! Thanks so much for supporting our project! We're holding off full celebrations until the campaign has come to a full stop, but for now, know that we're crazy happy with this and with you! 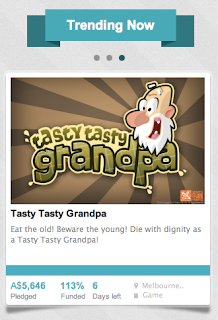 There are now 6 days left on the clock, and it turns out that we're already 1/4 of the way towards achieving the $2500 we need to hit our NEXT goal! THIS PROJECT IS STILL SEARING HOT! So yes, all lines are still open to help fund the project and help us hit our stretch goals. If you've been thinking about throwing in some lovin', we will be happy and also covered in lovin'. The more funds we get, the more content and polish the game will have, and the better THE WHOLE WORLD will be all round. You can pledge here!

So that's where we're at. If this were Toy Story, we'd be Buzz and Woody, clinging to the little car, after having lit our rocket. We're soaring, we're happy, we're a bit terrified... and we're overshooting the removal truck where we were originally headed... "We missed the truck!" screams Woody. "We're not aiming for the truck," replies Buzz, eyes on the sweet sweet sunroof ahead.

AN UPDATED LIST OF AWESOME PEOPLE (NOW WITH MORE AWESOME):

(these folks are helping make our game a reality!)

To hang with the cool kids, you can pledge here!: Pozible Tasty Tasty Grandpa!

Posted by GrappleGunGames at 2:12 pm No comments:

DING DING, friends! The bell's a-ringin', and that can mean only one thing -- there is one lap to go in the all-important, Olympic-style fundraising race we've set for ourselves to fund and finish Tasty Tasty Grandpa.

First up, we really want to say a massive THANKS to everyone who has pledged money to the project so far. We're stunned at the generosity of you fine, fine people. At the time of writing, we are at $4500 -- almost at our core goal of $5000!

We now announce... THE STRETCH GOALS (and a project update)!

Stretch goals are what we promise to add to the value of the project and to your contribution if we can hit higher targets than the core $5000 goal. This is not about greed (since the core team members aren't getting any of the funding money -- it's all going towards hiring an extra programmer!). Rather, it's a way to hit higher targets of quality and features in the game. If we can reach the $5000, we'll be stoked. But if we can make more, then all that extra money above and beyond the $5000 will make the game EVEN BETTER and will be mighty, mighty appreciated. You can see the new stretch goals in a Pozible campaign update here. And if you're a first timer to the project, we welcome you! You can read the full description on the Pozible campaign main page here!

So, as we hit this final week of our funding campaign, we ask you (we down-on-knees beg you!) to please think about contributing if you can, and to share the links across the world with people who might be interested in the project. A lovely bunch of independent game developers trying to catch a break will be so grateful, and imagine the warm feelings of human kindness you'll experience, just like all the backers listed below!

THE FOLLOWING PEOPLE ARE AWESOME:

(thanks so much for already pledging to help our game live!)

To join the awesome, you can pledge here: Pozible Tasty Tasty Grandpa!

Posted by GrappleGunGames at 7:32 pm


Putting the 'fun' in 'funding'


There was a total dev diary meltdown. A single keystroke wiped everything, autosaved a cold void over it all, salted the HTML earth, and it was gone. For months. But, like a bionic dude in a velour ‘70s tracksuit, it was rebuilt! Let that digital dog keep eating my digitial homework, the Tasty Tasty Grandpa Dev Diary is back, now on its own domain page!

First, some facts. Fact #1: We need an additional programmer to sit down for a bunch of dedicated hours to help us finish our game. Fact #2: The only way to reasonably ask someone for these dedicated hours is to pay them for their time and expertise. Fact #3: Like, WHO HAS THE MONEY to pay such good people? The solution: crowdfunding!

We made a video that includes both ukuleles and tantrums, and we used it to set up a Pozible crowdfunding campaign to raise funds, so we can pay a programmer to finish our game. And it goes well! Thanks to some amazingly generous people, we are already around 80% pledged in our first week, and if we clear 100%, it all becomes real!

YOU PEOPLE ARE AWESOME AND WE ALL THANK YOU!

If you would like to pledge, we would love you for it. LOVE! Anything that gets us to 100% of the target makes the game happen, anything above 100% we raise makes the game more polished, more awesome, and adds more love! LOVE! You can pledge at the Pozible Tasty Tasty Grandpa page, and there are REWARDS for doing so! REWARDS! LOVE! HUZZAH!

Until next week, thank you! Here are some handy links, for ease of everything.


The last thing you guys want to hear is how there’s nothing concrete to show this week, and how our tasks are moving along, but are moving along a bit slowly. So let’s talk about something else! Dreams!

When I’m not laying awake and worrying about this game and turning into a full-time insomniac (not the wonderful games company), I’m dreaming that we're stuck in a blizzard (not the wonderful games company), with snow whipping through cold air, lashing our faces, trying to get through to safety, but not knowing where it is. Or I dream of the team being in a house, and we’re not getting a lot of work done, as there are bugs all over the walls and we have to deal with those. As you can tell, my subconscious mind is not hard to work out. Developing this game is often great, but sometimes does not make me feel fine, let alone double fine productions incorporated south of market district san francisco (no relation).

I did get together with Stu this week, which was GREAT, and we worked over some of the issues I was having with my prototype tweaks. This is us, in a pub, working (not pictured: 500 nearby bulldog-type people wearing rugby shirts, who had flown to Melbourne for a rugby game between Brisbane and Sydney and were desperately trying to get hammered before heading off to the game. Why come here? We’ve got nothing to do with it!)


One thing DID happen this week, and that’s us deciding that there is too much coding to be done in too limited a time for Stu to handle on his own. So we’re going to call in another programmer to help out, oh yes! We need someone with time in their schedule, Unity in their head, and hope in their heart. We’ve sent our four fastest ships, one in each direction, to deliver our message. It’s a big ask, but we hope it’s all worth the asking. When the ships return, we’ll let you know what they bring. Until next week, maintain your noticeably high levels of tastiness!

Posted by GrappleGunGames at 5:39 pm