The Joy of Sax

Change can be unnerving. But also delightfully nerving! Is that a word? Let’s ignore it. The change I’m talking about here is the change from having made games for publishers and licence-holders over the years, and now just making a game for ourselves. The unnerving part is having all the responsibility on the team and not having someone else bankrolling us and occasionally giving us SpongeBob toys. But the joys are awesome -- we can do whatever we like! We can release art ahead of time, so you fine people can checkit (such as Tracey’s background experiments over at her tumblr) without going through a crazy chain of approvals and time zones. Our project will live or die on our own decisions. We’re yet to see if this is a good thing, but we’re really hopeful. :) 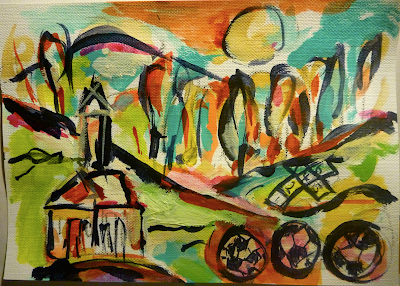 This week, stuff happened. The most exciting stuff was that Matt Christensen finished recording the 4-part saxophone soundtrack that he composed. It’s awesome! We’ll surprise you with this one on release, but just know that Matt somehow managed to record himself playing 4 different saxophones in a tiny room in his house. He may or may not have stapled a hundred mattresses to the wall. Audio people do strange things.

On the art front, Tracey finished painting the backgrounds! With PAINT! We’re going over to Blue Print Photography on Monday to photograph them nicely to bring out the sweet textures of canvas and chunky paint. And Damian is almost finished tweaking all the character animation, ready for Stu to work his code magic and get them in the game.

And there were FLOWCHARTS!!! Okay, they’re not exciting, I tried to sneak that in there to make my design role seem as glamorous as the others. But hey, if you’re a programmer, you’ll know that a flowchart is as tasty as a chocolate covered bar of pure chocolate. This flowchart explained all the logic behind the non-player character behaviour. What do they do when they bump into other characters? Ignore them? Get annoyed by them? Or maybe just go ahead and completely eat them in a disgusting but adorable way? The flowchart tells all. 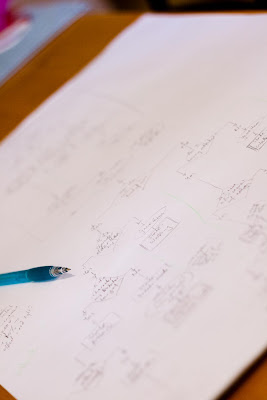 And that’s it for this week! I shall spend the upcoming week trying to find some more blog-worthy tasks for myself to do that sound better than flowcharting. Until then, thanks for reading, YES!


Posted by GrappleGunGames at 4:41 pm